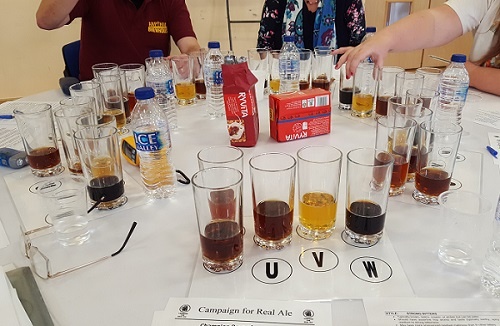 After Andy Whittard’s fun piece about agar in cooking, I thought I would write a more light-hearted blog for a change. I’m going to talk about my real passion in life, beer. I’ve been an active member of the Campaign for Real Ale (CAMRA) for many years. You may even have seen my ugly mug on a few volunteer’s posters if you’ve been to beer festivals run by CAMRA! As a microbiologist, you’ll be surprised to read that I’m not really into home brewing.  My love of beer comes from tasting the many varieties of beer out there in the wide world. I’ve travelled to a number of beer festivals in Europe; explored the best craft beer bars in New York and even experienced the madness of Oktoberfest in Munich – although Oktoberfest is technically a folk festival. 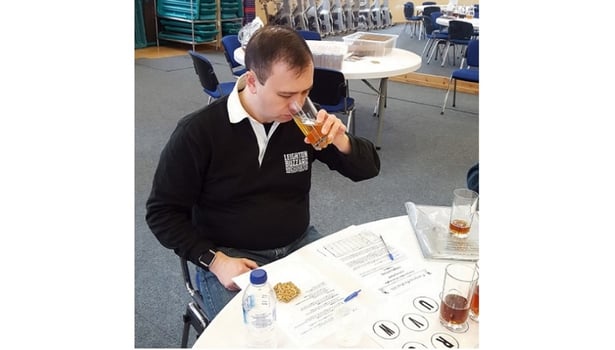 I went on a beer judging course a few of years ago, which focused on taste and aroma, a result of being on the judging panel at the annual Luton Beer and Cider Festival. The picture is of me judging in the strong bitters category for the East Anglian region at this year’s Luton Beer Festival back in February. The winner enters into the finals for the “Champion Beer of Britain” at the Great British Beer Festival in August. 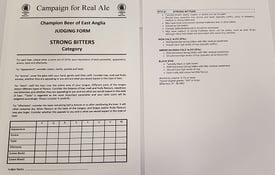 We judge using four categories: appearance, aroma, taste and after-taste. You may be surprised to read that some beers entered into the competition are not at their best. Usually, a problem beer is too cloudy (real ale should be clear unless stipulated when served).   This is where the yeast and/or proteins have not settled after the cask has been racked. A brewer will add a substance, called finings, which flocculates the live yeast and proteins in the beer into a jelly-like mass.  This then settles to the bottom of the cask. Sometimes it is a case that not enough finings have been added. However, sometimes the beer is contaminated.

The larger breweries for many years and an increasing numbers of micro-breweries will test the beer for contamination from undesirable microorganisms. Sometimes the yeast will be tested if it is re-used for future brews. Cherwell Laboratories offer a range of media used in the brewing sector in both 90mm and smaller 55mm petri dishes where space is limited for testing. Here is a brief outline of the various types of media we sell; along with the effect those contaminating micro-organisms will have on the beer:

WL (Wallerstein Laboratory) Nutrient Agar: The medium has a final pH of 5.5 which provides optimum conditions for the recovery of a wide range of organisms including Lactobacillus, Enterobacteriaceae, Pediococcus and Flavobacterium spp. as well as yeasts and moulds.

The addition of cycloheximide (WLD agar) makes the media selective for bacteria only. Pediococcus is the bacterium responsible for giving beer an atypical fruity aroma. It is also known for contaminating yeast cultures.

Raka-Ray agar: where the detection of Lactobacillus is of importance, this medium is used. Lactobacillus will produce lactic acid as a bi-product giving beer an undesirable sour taste. Lactobacillus will grow eventually after a cask has been tapped and the beer exposed to the environment.  However, the brewer doesn’t want to see Lactobacillus during or after fermentation, racking or bottling.

Lysine Medium: This is used for the enumeration of wild yeast from brewing (pitching) yeast. The popular species of brewing yeast are suppressed by this medium. An example of a wild yeast contaminant is Brettanomyces (Brett for short in the beer world), one of the most common wild yeast contaminants in real ale. This was especially prevalent in the days of using wooden casks when the spores would remain in the wood even after the cask was cleaned. I know of some beer historians who lament the absence of Brett in modern beers, now mostly conditioned in stainless steel or plastic casks. They claim Brett adds more complexity to the flavour. Brettanomyces is also one of the yeasts you will find in the Belgian Lambic beers contributing towards their characteristic tart sourness. Lambic beers will also contain Lactobacillus, about the only beer where its presence is acceptable. Tasting a Lambic beer for the first time is quite an experience and many beer drinkers struggle with the sourness – me included!

If you have any questions regarding our range of media for the microbial analysis of beer, please contact us and we will happy to assist!