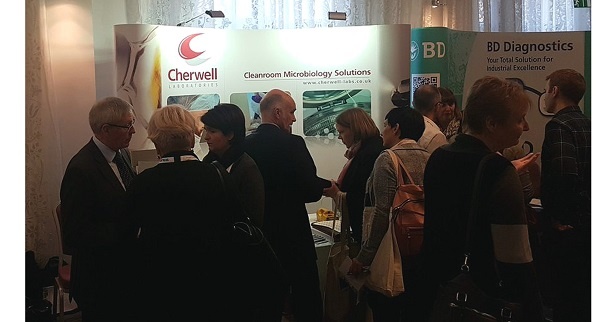 Cherwell Laboratories were proud to sponsor one of the discussion sessions at the 25th annual Pharmig conference at Crown Plaza, Heythrop Park near Chipping Norton in Oxfordshire.  I was co-host of the first discussion session with Cherwell's Sales Manager, Andrew Barrow.  I also attended the second session on environmental monitoring, which Steris sponsored.

We were keen for the delegates in our session to talk about the risks associated with Environmental Monitoring in their facilities.  Following a short presentation from Andrew Barrow, I got the ball rolling by putting forward the question: How do delegates choose their environmental monitoring locations?  The two most popular tools in choosing EM locations are Hazard Analysis and Critical Control Points (HACCP) and Failure Mode Effects Analysis (FMEA).  After an uncomfortable silence, Laura Guardi, a Pharmig committee member who works at AstraZeneca mentioned they use FMEA to choose the appropriate EM locations.  A number of delegates said they inherited their current system and they were unsure of the rational regarding the choice of the EM locations in their facility.  The main physical tool used was smoke studies looking at the flow of air.

After the slow start, the discussion was warming up quite nicely, the delegates saw this as a good opportunity to compare practices and get advice.  The question was raised about the frequency of EM in areas not in use.  Those who talked said they would do it weekly but the point was raised that the frequency should increase if there is a likelihood of the room being used again imminently.

There followed a lengthy discussion about active air sampling.  In grade D environments it is more than likely 1m3 of sample will deliver a plate that is too numerous to count (TNTC) – covered in colonies to the layman.  This does not give the microbiologist any worthwhile data.  The group agreed that taking a smaller sample volume and multiplying up to give a result equivalent to 1m3 was acceptable practice, as this was better at achieving a colony count.  We also covered the sampling speed of air samplers and the replacement of settle plates in isolators with active air samples.  A delegate mentioned that they use slit samplers that take 1m3 of sample over a longer period of time.

For the final part of our session, a delegate argued the point that settle plates do not offer any worthwhile information due to the airflow not allowing particles to settle on the agar surface and the lack of physical coverage.  Others in the room argued the defence of settle plates, saying it is important to have settle plates as continuous microbiological monitoring as RMM samplers are expensive and you cannot get an identification on contaminating colonies.

The EM session the following day followed a similar line to our session.  Aaron Mertens from Steris kicked things off, he was also interested in risk associated with EM.  One of the delegates quickly asked the question to the attendees on whether they used settle plates stands.  A number of delegates disclosed they use settle plate stands, mostly because their regulators were keen for them to do so.  The rationale being that settle plates should be at working height rather than floor level. It seems that some companies have gone to the extreme and put all their plates on stands rather than a mix of working height and floor level.  It was commented that it is important to have settle plates at low level to give an indication on what microorganisms are settling at floor level.

As the conversation flowed, the delegates started talking about incubation regimes and the expectations of their regulators.  There was no consensus found.  Some companies use dual incubation; one recently switched to a single incubation regime at 32°C, justifying the fact they saw increased recovery of both yeast and moulds at that temperature.  Another delegate mentioned they had recently stopped using SDA, which was challenged by the Russian regulatory authorities who wanted to see them use SDA.  Rather than yield to that request, they submitted further evidence to justify the removal of SDA from their EM regime.  I felt most delegates did not like SDA as a growth medium, one preferred Malt Extract Agar, the others felt that having a selective media in EM was unnecessary, especially when TSA is equal if not better to SDA for growing yeasts and moulds.

Other questions included the use of neutralisers in growth media.  The majority of delegates answered in the affirmative, using neutraliser combinations appropriate to the disinfectant being used.  The increasing trend of the absence of settle plates when monitoring isolators was once again mentioned.

Overall they were two fascinating sessions of discussion. It was good to see so many delegates talk openly about their EM regimes and the challenges they are encountering. Those delegates who did not speak were furiously taking notes, no doubt learning a great deal from their peers.

We are always willing to discuss the individual EM challenges customers face and are happy to advise you on the most suitable solutions we can provide for your specific requirements.  Contact us, if you would like to discuss your EM requirements.